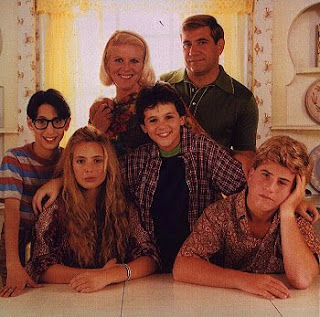 I can't believe it happened so quickly: this past week was my one year cable anniversary. Overall, I've been pleased with the selection of programming. I discovered that there is one half-decent TCM movie for every bum station filled with infomercials and mindless reality tv (In fact, I've watched 198 of them in the past year!). However, I've been lamenting the fact that I apparently missed out on the golden age of Nick At Nite and TV Land. I'm not sure how their definition of classic television has warped into George Lopez and Nanny reruns, and, while I used to watch Roseanne and a few other 1980s-90s sitcoms that air currently on (for some reason) multiple channels, they're not something that I'd want to watch for several hours every single day.

But deciding what to watch on television (my major daily dilemma) has just gotten a whole lot better and more confusing. The Hub is an all-new 'network for kids and their families' that debuted on October 10th. This cable channel has a prime-time dream lineup for fans of classic 1970s and 80s pop culture.

Family Ties 8-9 PM - Mallory dressed like Little House on the Prairie for the first season! [see also the Mallory's Clothes Tumblr]
The Wonder Years (my favorite show of all-time) 9-9:30 PM - With the original soundtrack. I don't believe this will ever be on DVD in its original format, so set your recording devices to catch every bittersweet moment.
Doogie Howser, MD 9:30-10 PM - Boy genius doctor and first ever blogger!
Happy Days 10-11 PM - Got a couch? Then sit on it, Potsie, while you're watching the Fonz! Ayyy?
Laverne & Shirley 11-11:30 PM - Best enjoyed with a Pepsi-Cola and milk!
Batman 11:30 PM - 12 AM - Biff! Zok! Adam West!

During the afternoons, Hub airs the Jim Henson classic, Fraggle Rock, and late at night they have the original 1980s animated Transformers and GI Joe series. There are also new versions of Strawberry Shortcake, My Little Pony, and the Pound Puppies (these are not the original animated versions that we enjoyed in the 1980s, though they still may be of interest). That's all I've noticed so far, but there might be even more exciting schedule additions! I haven't peeked ahead at the weekend schedule, but it looks like there's something called Family Game Night on Friday nights that is like Double Dare meets gigantic Hasbro games. Apparently the channel is owned by Hasbro, which explains the Hasbro game and Playskool advertisements.

Round out any schedule holes with the other great pop culture channel, Boomerang from Cartoon Network, and you'll never have to remember the last decade again. Boomerang has everything from The Banana Splits, Pink Panther, Scooby Doo (and other meddling kids in the guise of Jabberjaw and Speed Buggy), Top Cat, The Flintstones, The Jetsons, and Josie And The Pussycats to The Smurfs and The Snorks (to name but a few -- check the schedule for new editions).
Posted by Maria at 10/12/2010 10:40:00 PM