Fluorescerama: Race With The Devil (1975) 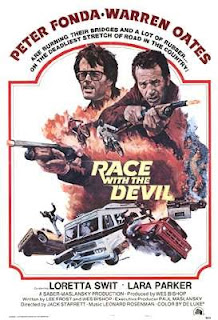 Satanists: something new for stoners to be paranoid about.

Unfortunately, from that point on, they pick up something even worse than Jack Nicholson: every single Satanist in Texas. And, believe me, there's a lot more than you'd expect. The towns seem overrun with them, and they have some kind of a communication system that puts the internet to shame. Faster than you can say 'text message,' crooked mechanics, sheriffs, and librarians track their every move and seem to be tipping off a mobile mob of Satanists hellbent on snuffing out the outsiders before they find someone who doesn't have sympathy for the devil. However, time is on the side of Satan because, apparently, that hypothetical person is well outside state lines, and Texas is very large indeed. My favorite part of this cheesy chiller is when the two airhead wives take a demonic text out of the library to try to get some answers!

This movie poses the question: can four mellow hippies in an equally sluggish RV outrun the Satanists who are out for their blood? What's incredible is that the Satanists display an admirable work ethic as they attempt to catch up to the gang. Like, be cool, man, I won't give away the conclusion to this blazing suspense story, but if you're a fan of trashy b-movies, this one will have you on the edge of your bean bag chair (or, well, propped up uncomfortably). Race With The Devil is a great lesser-known addition to your Halloween scare-a-thon! 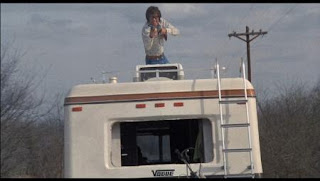 (Incidentally, after having a sort of mid-life crisis, Jarvis Cocker of the greatest Britpop band, Pulp, completely styled himself after Peter Fonda. They're practically identical, and that in itself is chilling.)
Posted by Maria at 10/18/2010 01:25:00 AM