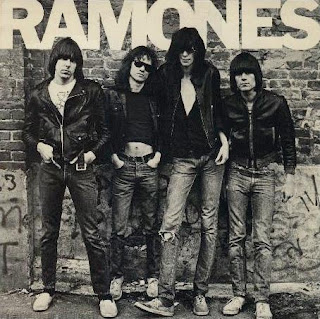 The Ramones might not have cared about history (it just wasn't where they wanted to be), but they made it in August 1979 when they exploded on to the big screen with the cult favorite, Rock 'N' Roll High School [2]. The Queens, New York-based band shared screen time with PJ Soles (Carrie, The Boy in the Plastic Bubble), Vince Van Patten, and Clint Howard in this apocalyptic teen comedy.

The premise is an easy A: PJ Soles is Riff Randell, typical Ramones-obsessed teen who ditches school to secure a ticket for the Ramones concert. But when her tickets are confiscated by Vince Lombardi High's newest and nastiest principal, Miss Togar, she has to find a replacement. Proving once and for all that teachers and parents just don't get it, an auditorium of concerned authority figures rile up the student body with a massive record burning that must have been more painful to endure than a teenage lobotomy. But, don't worry, the PTA gets it in the end! What results is a fun-fun (oh ba-by!) teen comedy for the ages that should send everyone Gabba Gabba Hey-ing all the way to the cineplex. It's a blast, literally!

Joey, Johnny, Dee Dee, and Tommy pack their soundtrack with some of their best and most memorable songs, though there are quite a few non-Ramone contributions (Fleetwood Mac?!). The best movie scenes are the ones that actually feature the red-hot rockers. In a sequence that is surely every teen girl's fantasy (?), Joey serenades a barely-dressed Riff with 'I Want You Arou-ound.' Later, the quartet bursts on the scene with their lamentation, 'I Just Wanna Have Something To Do' (Might I suggest having some chicken vindaloo?).

Rock 'N' Roll High School Forever was the 1991 bomb of a sequel starring Corey Feldman and a handful of lesser California punk icons. I mean, who would choose Mojo Nixon over Joey Ramone??

Email ThisBlogThis!Share to TwitterShare to FacebookShare to Pinterest
Labels: 1970s, on this day, rock 'n' roll high school, the ramones