[Note: I am by no means a film student or critic, and I certainly am not a Wellesian expert. These are the inexperienced impressions of a fairly new Orson Welles fan.]

Orson Welles [2] has the reputation of being one of the earliest American auteurs known for elevating his films to an artform. It's almost inconceivable that his ultra modern camera techniques, which have retained a startling freshness that hasn't diminished with age, first graced theater screens almost seventy years ago. His innovative camera work stands out as his cinematic signature: endless long-distance shots, daring single-shot pans, and light trickery.

Welles populates his world with smugglers of illegal goods, black mailers, crooked cops, murderers, and immoral men of importance who will stop at nothing to get ahead. His aren't your average b-movie baddies. Even the beautiful women are neither the typical two-faced seductresses nor the helpless dames of the noir genre. There's a fragility that the hardened femme fatale eschews tempered with a worldliness to which truly distressed damsels cannot relate. And, of course, there are the innocent men who collide with these characters, and stumble away, dazed, by the stingle of madness. Welles' characters regularly toe the line between humanity and insanity. Perversity lurks behind many a thin veil of prosthetics, masks, and facial hair, just barely concealing the character's lunacy.

What elevates his movies above basic b-rated noirs is his cynical philosophy. In fact, his allegorical oeuvre may be more illuminating today in our age of mega-corporate corruption, bureaucratic waste, and a failing society that embraces fame and power at any price.

These are philosophical tales that relish building up a man to his ultimate greatness, always careful to expose his single vulnerability (often a dame). Then, allowing enough room for the character's inevitable madness to rise to a crescendo, he topples his entire legacy into ruins before your stunned eyes. Wealthy financiers, media moguls-turned-politicos, celebrated cops: none are safe from this terrible fate. Money, fame, power, and influence are nothing in those final moments that bring every man back down to the level of the everyman. These are Welles' exotic meditations that take us on a tour of the world, to strange ports of call, and introduce us to all manner of eccentric character, many with jarringly unpronounceable names. And, like his intricate play of lights, what's important isn't hidden away in the darkest shadows or exposed by the brightest lights; the pulsating neon, the double negatives, and the shades of gray serve as a cinematic underscore to his ruminations.

Even when Orson Welles was disappointed with his end result -- which was, apparently, always -- the audience really knew better. How he chastised his audience for loving him so, as if we were the duped, like his Michael O'Hara in The Lady From Shanghai, the outsider invited into a floating madhouse. And, perhaps in Welles' harshly critical eyes, the cult of Wellesian scholars are his cast of prosthetic noses, a meaningless pretension that adds nothing to the plot or O'Hara's Irish brogue, a show-off that sticks out like a sore thumb.

For your consideration, my three favorite Orson Welles films, three exemplary film noirs (Note: You should assume that this post and any links on this page will spoil the movies! Read at your own risk if you haven't seen any of the movies yet!): 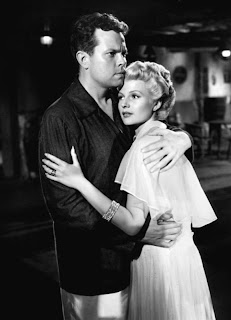 Welles and Hayworth sizzle in The Lady From Shanghai


After appreciating the sleek, never-ending opening shot of Touch of Evil that sweeps us across a bustling Mexican town, constantly changing focus from various people or vehicles, keeping the viewer guessing where our eye is ultimately meant to rest, it was strange to experience the unfortunate state of The Lady From Shanghai. The poor editing is choppier than the waters on which Michael O'Hara and his shipmates sail. 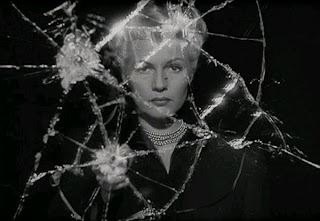 How 'bout a little tarrrrr...get practice?


Real-life couple (at the time), Orson Welles and Rita Hayworth sizzle as the hapless Michael O'Hara and the mysterious Elsa Bannister, a married woman who seems to harbor a dark past of exotic exploits. O'Hara is instantly infatuated with the smoldering Mrs. Bannister and seems powerless to her advances. Bannister hires her lover as a seaman to accompany her and her sadistic husband aboard their yacht. Also on board is Mr. Bannister's loopy business partner, who has a headful of proposals that makes the insistent 'criss-crossing' of Robert Walker's character from Hitchcock's Stranger's On A Train seem comparably normal. Their plans soon go awry, and the plot becomes more and more convoluted, leading up to the memorable fun house scene. While sources state that the theatrically-released Lady From Shanghai failed to capture Welles' vision, the choppiness does add a level of disorientation that complements the spiraling plot. 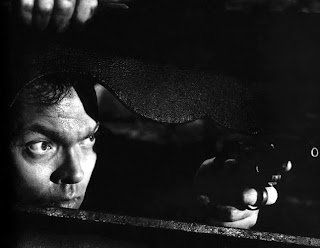 
Cue that cynical zither music! The Third Man follows boyish Harry Lime's (Welles) Viennese escapades. Lime is a popular figure in the underworld and garners a lot of influence with the wrong sort of people. His longtime friend, a writer named Holly Martins (Joseph Cotten), travels to Vienna to take his friend up on a business offer. Unfortunately, Martins just misses him as his funeral happens to be that very day. Martins is told several stories about the tragic accident that claimed his friend's life, but he soon begins to question whether the death was accidental when news of a third witness is quickly hushed up. Martins sets out to unravel the mystery of Lime's death but uncovers disturbing details of shady business deals. And, what of this alleged third man? Fans of this movie might enjoy listening to the prequel radio series The Lives Of Harry Lime, which aired two years after the release of the movie. The film, Mr. Arkadin [on Hulu!] was derived from three episodes of this radio series. 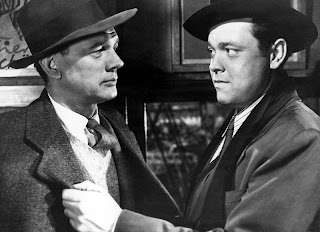 'In Italy for thirty years under the Borgias they had warfare, terror, murder, bloodshed -- but they produced Michelangelo, Leonardo da Vinci, and the Renaissance. In Switzerland, they had brotherly love, five hundred years of democracy and peace, and what did that produce? The cuckoo clock!' 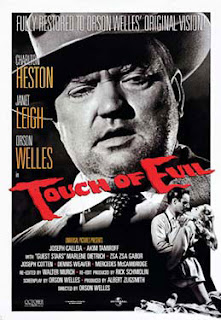 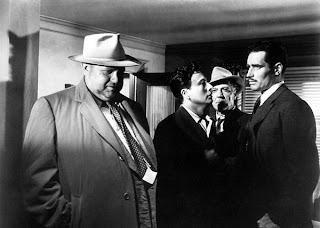 'I don't speak Mexican...Let's keep it in English, Vargas.' (My favorite scene has Vargas, a Mexican cop, speaking to a Mexican criminal in Spanish, and the criminal asks him to speak English. That's realistic!)

Charlton Heston is impressive as Miguel 'Mike' Vargas, a respected Mexican narcotics officer targeted by a crime family he has been working on. Janet Leigh plays his lovely American bride, Suzy. Unfortunately, their honeymoon is cut short when a car bomb goes off over the border, and Quinlan (Welles), an imposing American cop with some 'hunches' and an inclination towards prejudice, is put on the case. Vargas puts up with Quinlan's verbal abuse, but, when he starts to have a hunch that Quinlan isn't exactly on the straight and narrow, Vargas decides to investigate. Can Vargas expose the police corruption before Quinlan brings him down? Interestingly, Touch Of Evil parallels yet pre-dates Hitchcock's Psycho (1960). In both films, Janet Leigh is victimized in out-of-the-way motels managed by creepy 'night men' (notably Gunsmoke's Dennis Weaver in Touch Of Evil). 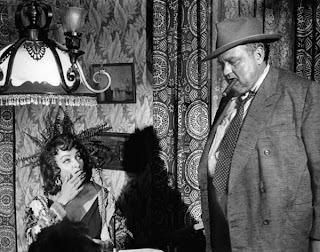 'You should lay off those candy bars.'


I'm not much of a Marlene Dietrich fan, but she steals every scene away from Orson Welles, which is very hard to do!

Touch Of Evil at AMC's Filmsite
Touch Of Evil at Doctor Macro
Touch of Genius: An Interview with Charlton Heston (an interview from 1998 about working with Orson Welles)

Other links:
Orson Welles: Great Directors series at Senses Of Cinema
Lilly Library Guide to the Orson Welles Collection
Wellesnet, which is apparently closing, but I don't know if the site will remain intact.
Posted by Maria at 8/20/2011 12:20:00 AM

Email ThisBlogThis!Share to TwitterShare to FacebookShare to Pinterest
Labels: films, fluorescerama, orson welles, the lady from shanghai, the third man, touch of evil