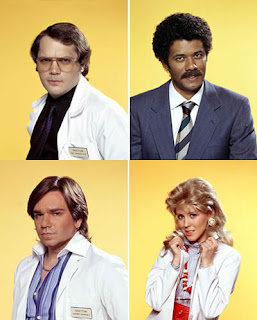 Fans of those lovable misfits in the basement at Reynholm Industries (The IT Crowd) will want to direct their attention to Richard Ayoade's earlier series, Garth Marenghi's Darkplace [2]. In this series-within-a-series, real-life actor Matt Holness plays Garth Marenghi, an extremely prolific horror writer who has, by his own admission, written more books than he has actually read. Marenghi was too much of a dream weaver to be bound to the written page and was commissioned by the UK Channel 4 to create a television program based on his popular tales of the strange and the macabre. He set his supernatural medical drama in a doomed hospital called Darkplace and called on the (lack of) talents of his literary agent, Dean Learner (played by Richard Ayoade), and the actors Todd Rivers (Matt Berry) and Madeleine Wool (Alice Lowe). The resulting series is a masterpiece with all the hallmarks of a typical action-drama from the 1980s, including slow-motion action sequences (special effects thanks to deanamatronix!) and cheesy electronic music ('based on melodies originally whistled by Garth Marenghi'!). Not to mention the terrible, terrible acting and ridiculous plots! The inside story goes that the series was so controversial and outre when it was first produced in the 1980s, that Channel 4 locked it up in its vaults. Twenty years after its production, the channel was finally brave enough (read: ran out of better programs) to air the series, and they quickly cobbled together a few talking heads of the living actors to complement the six unaired episodes. I don't want to spoil the plots or comment on the backstory any further. I know that it seems like a convoluted premise for a comedy series, but it pays off in many respects. Though it doesn't have much in common plot- or production-wise with one of my favorite American comedies of the past decade, Arrested Development, I feel that the two shows share a densely layered vision that is truly glorious when considered in its entirety.

Unfortunately, despite a few laps on Cartoon Network's Adult Swim block, the show hasn't seen much interest in the U.S. The existing DVD package is Region 2 PAL, and there doesn't seem to be much hope that any further package will be released soon. Interested viewers must either hope to catch episodes on late night Adult Swim or turn to YouTube to get a taste of this underappreciated comedy. Until it's next turn on Adult Swim, here is a playlist of the six episodes on YouTube:

A bit of Garth Marenghi fun is that any interviews or promotions that Richard Ayoade and Matt Holness did for the show were done in character. For the purposes of Darkplace, Holness and Ayoade don't even exist. There was even a sort of spin-off show called Man To Man With Dean Learner. Richard Ayoade reprised his character for this celebrity interview show complete with clips of fictitious movies and television shows. Matt Holness portrayed all the guests, including one appearance by Garth Marenghi himself! Each guest is creepier than the last, and, while the show isn't quite as funny as Garth Marenghi's Darkplace, it would be nice for Adult Swim to pick this one up as well. Unfortunately, YouTube doesn't appear to have any full episodes of the show at the moment. 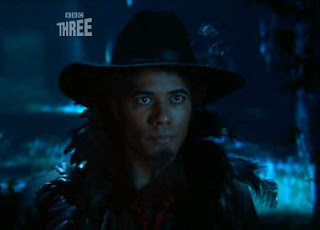 [Richard Ayoade as Saboo on The Mighty Boosh]

There are quite a few familiar faces on a small handful of superb British comedies of the past decade. Richard Ayoade has been one of the most sought actors. He doesn't only star on the aforementioned Garth Marenghi's Darkplace; Man To Man With Dean Learner; and The IT Crowd. He also voiced the nefarious Dixon Bainbridge in the original Mighty Boosh radio show. The character only showed up on the first series of the television production, and Ayoade handed the role over to Matt Berry (also seen as Douglas Reynholm beginning on the second series of The IT Crowd). Richard made a few appearances on The Mighty Boosh, though, as the shaman Saboo. He also made some amusing appearances on various satirical Chris Morris (Denholm Reynholm), Armando Iannucci, and Charlie Brooker projects. 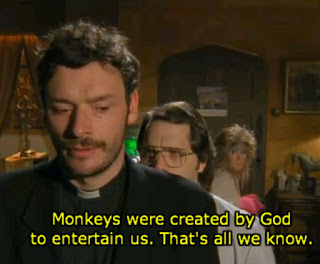 The Mighty Boosh will require an eventual post of its own, but, for now, I will say it consists of the mod wolf, Noel Fielding (Richmond of The IT Crowd), and his jazz-loving compadre, Julian Barratt (seen above as Darkplace's priest). The Boosh is wild by comparison to both Garth Marenghi's Darkplace and The IT Crowd and may defy description. All three series of the Boosh are available in the US, and I encourage its viewing.