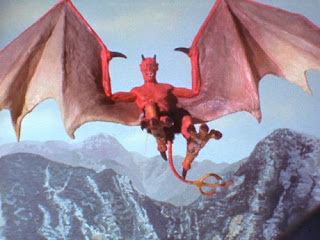 In the tradition of the Peter Fonda cult classic Race With The Devil, Equinox is a supernatural thriller that satisfies on every level. The ludicrous plot seems stitched together at random by someone suffering from short term memory loss, and the characters' motivations are illogical at best. The acting is hollow, and... it was a real laugh riot! Although I might have found this movie amusing for all the wrong reasons, watching Equinox is a recommended treat!

[WARNING! This post contains a full plot synopsis that will spoil the movie for you!]

Equinox begins with one of the most familiar thriller scenarios: two male students bring their girlfriends to a remote locale to meet their favorite professor. I'm not sure why men always think their female companions will be overjoyed to spend a day with an unknown, and ultimately eccentric or maddened, old man. This seems to be an even more significant step in the courting process than bringing the girl home to meet mother.

The quartet plan to picnic in the forest where the professor has a rustic cabin and then pay their mentor a visit. As soon as they arrive, a creepy and intimidating park ranger emerges from the dense forest with a message that conveys, more or less, 'abandon hope, all ye who enter here.' He clearly doesn't want the kids around. But if ants and bees won't spoil a good picnic, neither will the grim lurking presence of Beelzebub. Before the gang sits down to their platter of cold cuts, they happen upon their professor's cabin, recently imploded and definitely uninhabitable. Momentarily, the stunned pupils express their concern for the professor's whereabouts, and the reemerging ranger (soon to identify himself as 'Asmodeus') insists the professor must have sought refuge in town where the kids should go to find him. Before they can follow through with the mystery of the professor's fate, they spy a very medieval castle way off in the distance. They were sure it hadn't been there a moment before, and decide to get a closer look. However, before leaving the picnic grounds, they happen upon something even more significant: a cave, mouth agape, maniacal laughter emanating from its depths. Should they check it out? For sure! Torches ineffectively lighting their way, the kids foolishly head into the cave following the sound of a manic, hyena-like giggle. Soon enough, they discover the giggler is an old man brandishing an ancient tome. He has been waiting to pass this book off to whatever dumb schmuck would be dopey enough to enter a cave echoing with mad laughter. The schmucks have no inkling of the evils the book represents, but they are only too eager to take it away from its owner. The book is protected by a flimsy lock that is easily picked open (apparently the only skill among the four is picking book locks), and they crowd around to see the pages of unreadable glyphs and symbols. Though they seem to lack any common sense between them, they conveniently guess that the book is a valuable deterrent to a demon attack. And, hey, they all just happen to possess all the sketched holy symbols already! The boys hadn't been aware of the professor's connection to the book or the studies of the dark arts, so they are flummoxed to find a page of his handwritten notes tucked into the pages of the book.

Still scratching their heads over the pages of strange doodles and stranger languages, they are barely fazed by the sudden appearance of the professor who tears out of the dark forest to rend the tome from their possession. You'd think they'd be thrilled to see their professor alive, but they are more interested in regaining the mysterious book. This is the pivotal scene in the movie when the four decide they should go separate ways alone in the forest as often as possible, and that alone is the only goal that they see through to the end of the movie. Why, it seems like every other line from any of the characters after this point is that they should split up, and the suggestion is always met with incomprehensible enthusiasm! Anyway, the fellas go to chase their professor and follow him to a shallow stream bed where he falls and dies. The guys scoop up the book and head back to the girls but momentarily decide that maybe they shouldn't leave the professor's body. They turn back and... his body is missing! The boys are hardly shaken by this new occurrence. Meanwhile, in their absence, Asmodeus the park ranger has attempted to assault one of the girls (all the while with a laughable slobbery expression on his face which looked more like a Jim Carrey character than the devil), and one of the boys flatly recalls, "Oh yeah, I just remembered. Asmodeus is another name for the devil.' Um. How could one forget that?! It's as if Asmodeus were one of the most unmemorable names! 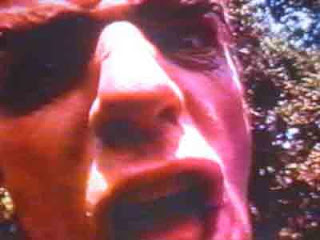 'The look of love is in your eyes'

The fact that their picnic has been irrevocably cursed isn't enough to convince the gang that they should really pack up their stuff and move on. It's not even really clear what they're attempting to do in the woods. The memory of the professor has long since ceased to be a concern. Once in a while, they remember that ornate European castle, incongruous in the distance of the American forest. There seems to be a vague agreement that they want to hang on to the book, but they never manage to give a good reason why. Ranger Asmodeus senses their foolishness and realizes he needs to flex a more evil muscle to scare them off. This is when, heavens to Harryhausen!, the stop-motion monsters start to run amok. The devil apparently conjures up these infernal stop-motion beasts in a show of his might. The frightened foursome witness amusing gorillamen (that reminded this viewer more of the Rankin/Bass Abominable Snow Monster) and all creatures great and evil for their rassling amusement. The best beast of all happens to resemble Jolly Green Giant's grounchy bigger brother. The best thing is that all these mighty savages of mythological proportions are seen looming in the distance, but after they tear their victim to bits, the group slays them a little too easily with flimsy weapons made of saplings. When they inch towards the dead monsters for a closer look, the gargantuans definitely appear smaller than the humans. After a spate of these attacks, Asmodeus tries a new tactic. The girl who was nearly assaulted by the evil one becomes possessed and attempts to reenact her assault on one of her companions with the same slobbery face the devil wore. 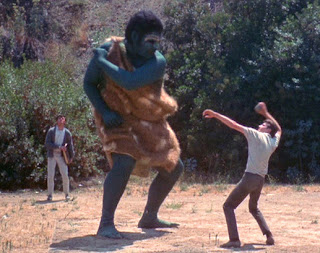 Towards the end of this fateful film, the story returns to the mysterious castle. The boys discover it is hidden behind some kind of force field which sometimes renders it invisible. They don't care what the force field is or why it's there, but they play around with it for a few minutes. Asmodeus can take no more of this tomfoolery, and he turns himself into a bright red pterodactyl with a taste for human blood. Only one character makes it out of the showdown alive. As Asmodeus takes his human form for the final time, he lets that survivor know that, though he will let him live in exchange for the ancient tome, he is cursed for ever possessing it. He promises the boy that he will die in one year and one day. While trying to flee, a driverless car attempts to run him over, but he manages to escape and is picked up and brought to the local sanatorium. He spends the next 366 days straitjacketted until a reporter requests to hear his story, and, in a rare moment of lucidity, he acquiesces. The reporter and caretakers muse that this is the doomed day that Asmodeus foretold his death. In the final scene, the crazed man struggles against his guards as a very familiar woman approaches the hospital with a mischievous grin...

Stylistically, Equinox is an intriguing yet inconsistent experiment. To me, it almost seemed like a student film or an experimental piece for a bunch of young filmmakers (trivia: Ed Begley, Jr. was one of the cameramen!). The plot is haphazard and many of the young actors seem less than amateur. But, for all the unintended entertainment value, there really is never a dull moment with Equinox. Unless I've misinterpreted the trivial plot, there really wasn't any philosophical basis to the plot nor any real explanation as to why it was even called Equinox. I'm sure many of the movie's apologists would bristle at my shallow response to the movie, but I wouldn't hesitate to recommend it to fans of this genre of b-movies.

DVD Drive-In offers a better review that is more informed and complete than my own. It discusses the technological merits of the film for a person already familiar with the plot, and, in particular, the Criterion edition. Yes, you read that right, the Criterion edition! Scraping the bottom of the barrel? Finally, WGON Helicopter has a more balanced review ('Equinox - The Movie That's So Awesome It Doesn't Care If You See The Strings').
Posted by Maria at 11/27/2011 12:08:00 AM