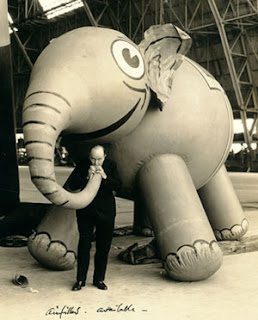 Chances are, while you're waiting for your turducken to heat up, you will be one of the 44 million people who will tune in to this year's Macy's Thanksgiving Day Parade. After all, it's tradition! What you might not realize is that this year is the 85th anniversary of the holiday institution. And this oldster is showing no signs of slowing down! The parade will add at least six new balloons and floats as well as a controversial new route. In honor of the milestone, here are eleven trivial nuggets about America's favorite parade that you can use as conversation fodder around your dinner table.

1. While Macy's Thanksgiving Parade is the one most associated with the holiday, it is actually the second oldest Thanksgiving parade in the U.S. (the first being Philadelphia's Gimbels parade, now known as the 6ABC IKEA Thanksgiving Day parade, which began in 1920). The history of Macy's parade is more circuitous. The first parade was in 1920, but it didn't become known as an organized annual event until 1924. This year marks the 85th annual AIRED parade which is why it's a noteworthy anniversary. It was first broadcast on local New York radio from 1932-1941 and 1945-1951 (there was no parade between 1942 and 1944 because rubber and helium were needed for the war effort). It was first televised locally in 1939 but wasn't televised again until 1945. CBS-TV was the parade's first national broadcaster in 1948, and NBC became its official broadcaster in 1955. Due to technical broadcasting regulations, CBS maintains 'unauthorized coverage' under the generic title 'The Thanksgiving Day Parade on CBS'. They cannot mention 'Macy's' in their name. The other major difference between networks is timing. NBC uses tape delays in broadcasting so all time zones watch the parade simultaneously, while CBS airs its unauthorized coverage live in most time zones. Broadcasts have been in color since 1960. The official duration of the parade is three hours, but it wasn't aired in its entirety until 1969.

2. The original route was a six-mile stretch from 145th Street in Harlem to Herald's Square at Macy's flagship store on 34th Street. Rerouting in 2009 eliminated Broadway, and this year's further rerouting has sparked controversy.

4. Live animals from Central Park Zoo marched down Broadway in the first parades but was hastily phased out in favor of large animal-shaped balloons. Another early tradition was the anticipated Santa Claus finale. At the end of the first parade, St. Nick was coronated 'King of the Kiddies.' 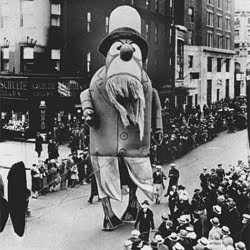 5. The wonderful, wonderful first balloon was Felix the Cat in 1927. Balloons are a highlight of the parade, but they have required much trial and error since their introduction. The first balloons were produced by Goodyear and filled with air. Helium became the standard in 1928. The following year, Macy's had address labels sewn into them so errant balloons could be returned for a $100 reward.

6. Mickey Mouse first joined the festivities in 1934 (there have been four versions). The character with the most balloons has been Snoopy with a total of six different versions since 1968. The third Superman balloon (1980) was the largest balloon ever, but his feat was bittersweet; he lost his hand in a tragic entanglement with a tree branch.

7. Other early balloons included the Marx Brothers (minus Zeppo) and Eddie Cantor, one of only two balloons based on living persons. Ad men must have been hard at work on promotions. An impressive array of pop culture spokescharacters have been immortalized in balloon form including Elsie the Cow (1963); Smokey Bear (1966); Nestlé Quik Bunny (1986); Ronald McDonald (three versions between 1986 and 2009); Snuggle Bear (1987); Honey Nut Cheerios Bee (1999); Kraft Cheesasaurus Rex (2001); M&Ms (2003); 'Healthy Mr. Potato Head' (2005); Energizer Bunny (2006); and the Pillsbury Doughboy (2009). Three balloons will be introduced in 2011: the second version of Sonic the Hedgehog, Julius (is that the wide-mouthed monkey?) and Tim Burton's 'B'.

8. Falloons are float-based balloons and balloonicles are self-powered balloon vehicles. The first falloon was 1991's Humpty Dumpty, and the first balloonicles were a set of Weebles in 2004. Other pop culture notables have included a 'Jello' falloon (1997); an Energizer Bunny balloonicle (2006); and, OHH YEAH!, a Kool-Aid Man balloonicle (2010). This year, keep your eyes peeled for the Aflac Duck!

10. Live music has always been an important part of the day's celebration. Besides the legions of marching bands, there are Broadway showstoppers and popular live acts. The telecast in front of the 34th Street Macy's uses pre-recorded music. This year, we can look forward to performances from Neil Diamond, Michael Feinstein, and the Muppets and Sesame Street cast. Performances from Broadway shows include How To Succeed In Business Without Really Trying; Spider Man; Sister Act; and Priscilla, Queen of the Desert. Making the most of New York's talent, the past decade's parades saw performances from 42nd Street; Oklahoma!; The Producers; Thoroughly Modern Millie; Spamalot; Young Frankenstein; and South Pacific. How's that for entertainment!

11. While every effort has been made to prevent accidents, there have been some grizzly incidents through the years. Most involve balloons snagging on lampposts resulting in shredded sides and, sometimes, broken glass. The Great Tragedy of 1986 included a rampaging Raggedy Ann, who knocked down a lamppost, and Superman's hand being torn off by a tree. Sonic the Hedgehog attacked an off-duty police officer in 1993. Most reported injuries have been minor, but there have been a few that resulted in serious hospitalizations.

Forecasts suggest that wind will probably be an issue this year, so be careful if you're in the crowd!

A Selected History of the Macy's Thanksgiving Day Parade

NBC will air a Macy's Thanksgiving Day Parade 85th Anniversary Primetime Special hosted by The Today Show's Matt Lauer, Ann Curry, and Al Roker on Thursday, November 24th at 10:00 PM EST (check your local listings). It will be reshown on Saturday night at 8:00 PM EST. This sounds like 'must see' tv to me!