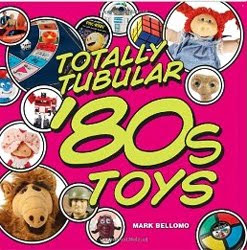 Totally Tubular '80s Toys by toy expert Mark Bellomo (Krause Publications, 2010) is, so far, the most complete 1980s toy bible on the market. When I spotted this hefty hardcover on a display rack and viewed a few sample pages, I knew that this was the 1980s toy book that I had been searching for. The 1980s is a decade known for some of the greatest cartoon/figure tie-ins and some of the most creative toys ever made. As well, children of the 1980s were lucky to experience the last decade where toys were designed to spark creativity and imagination rather than passively entertain them whilst relying on flashing lights and electronic noises.

Totally Tubular did a lot of things right where earlier volumes that sought to tackle the same overwhelming subject failed. First, it divided the decade up by year which created a sense of organization that other books I've read lacked. Each year has a breezy introduction which hits on the toy franchises included in the book as well as the popular movies, television shows, and recording artists of the year. This adds some much-needed pop culture context to each chapter's selection of toys. Bellomo caps off each year with lists of top television shows, movies, and music for added reference.

The area in which this book especially shines is the photography. It is the first volume on the subject that I have come across that is not stingy on the pictures. It showcases more than five hundred toys, and the full color pictures practically pop off the page. All the toys come from the writer's personal collection, and every photo is in beautiful full color. The photos are well-composed shots that are meticulously posed, clearly laid out, and extremely well-captioned, so you can really get a sense of the full line that each franchise offered. This not only maximizes nostalgia, but it also aids in identification for your own personal collections. Figures are shown outside the box and posed with accompanying accessories, playsets, and other additional items that could have been purchased, such as vehicles, horses, and houses. Some original packaging is also shown. The book is in a slightly larger format so it is very easy to see the individual toys. Totally Tubular is worth every penny just for the pictures.

The accompanying text is informative and full of interesting trivia and tidbits, but it's never dry like some collectible books can be. The writer's personal anecdotes are a positive addition. His upbeat assessments of each line of toys are never so opinionated as to be debatable. A few years ago, I read another fun (and recommended!) book about 1980s toys called Just Can't Get Enough. While I mostly enjoyed the book, I found the author's anecdotal style to be a deterrent because his assessments were sometimes more negative and skewed, and the book was far less informative overall. Some chapters really had a sort of bitter tone that was reminiscent of a bratty kid-turned-adult and left this reader with a bad taste. For instance, in his section on My Little Pony, he bluntly stated that his sister had a collection and he hated them. And that was pretty much the end of that. To add to the less appealing commentary, the few small photos included in the book were really inadequate. Also, there was marked emphasis on boys' toys that I found to be disappointing. Totally Tubular also had a tendency to gloss over some popular girls' toys, though it does hit on all the major franchises you would expect, including She-Ra, Rainbow Brite, Cabbage Patch Kids, and Jem. All the most popular toys are well-represented here, as well as movie and tv show tie-ins including Star Wars, Ghostbusters, Pee-wee's Playhouse, and Bill And Ted. If a figure existed as a tie-in, it's in this book! There are a lot of obscure toy franchises featured, as well, though many are of the robotic, superhero, or science-fiction varieties. To me, this was the low-point of the book. While it was interesting to see some of the franchises that never became iconic (or that I simply had no interest in), I felt that the author chose to include too many obscure boys' toys in lieu of slightly more recognizable girls' toys that haven't been featured in any book I've read on the subject. Granted, the author might not have had those girls' toys in his personal collection, and he certainly had a more balanced selection than Just Can't Get Enough, but I was still disappointed in some of the toys that didn't make the cut. Anyway, nostalgia is a bottomless pit, and I think there is still room on the market for other books chronicling toys of the era which will hopefully be less of a rehash of the popular dolls and delve into some of these regular omissions (I'll keep my personal list of omissions to myself, though, since we never know who the author(s) of those books may end up being). Undeniably, Totally Tubular will be the standard by which to judge any future additions to the topic.

The list price of the book is $30.00, but Amazon has it marked at the very apt price of $19.80! Also, if you regularly receive store coupons, you might be lucky enough to get it at up to half price. It's worth it; this is a handsome volume on a very serious subject.

* As a side note, this book is the ultimate argument for brick and mortar bookstores. I went into the store where I purchased this book not knowing it even existed, saw it on a prominent display, flipped through a few pages, and knew immediately that it had to come home with me that very day. Sure, I might have found it online eventually, but looking at a thumbnail of the book cover and reading a few rave reviews wouldn't have resulted in an instant sale. At best, it would have been added to my humongous list of pop culture books of interest. Nothing is more convincing than being able to easily examine a book in person. Currently, even the big bookstores (Borders, B&N) are facing their mortalities, and I fear there will be fewer opportunities for the joy of discovery. The world is changing and not for the better. I continue to cling to America's endangered past!