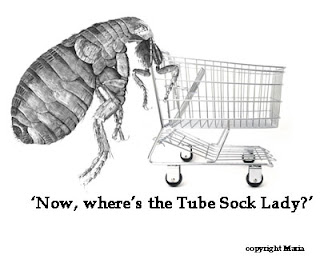 A Flea Market Documentary is a cross country celebration of cool junk and the people who frequent these ragtag tag sales. The documentary was made for Pittsburgh's WQED PBS by my favorite pop culture filmmaker, Rick Sebak. His series of regional documentaries, including Sandwiches That You Will Like and A Hot Dog Program, have more warmth and depth than similar shows featured on the Food and Travel channels. This is his most exciting work to date.

Americans may think of flea markets as gatherings that are unique to our culture, but similar open-air street markets are said to be of French origin (from 'marché aux puces'). Such markets became popular in Paris from 1880 through 1900 when rag-and-bone men set up shop selling their wares in the fortifications between Paris and the town of Saint-Ouen. Eventually, flea markets hopped a ride to North America and set up shop in urban neighborhoods and suburban and rural spots across the country. They hit their peak in late 1960s but have remained wildly popular community events ever since.

Sebak's documentary attempts to articulate the continuing appeal of flea markets from coast to coast. Through entertaining and passionate vox pop candids, he interviews serious collectors scouring antique booths for bargains to those apian casual shoppers who buzz from table to table, browsing the items for sale. Many seasoned bargain hunters attribute their love of flea markets to childhoods when their families would spend their weekends going from market to market (like mine!). They might have a largely nostalgic and emotional response to discovering lost treasures from their youth. Others say they love meeting new people and learning the stories behind the sellers and their wares. Flea markets are truly the American melting pots. One interviewee suggested that they are the perfect place to people watch. The multicultural appeal of flea markets makes them a sort of mini-metropolis. The unlikely juxtaposition of things spanning every generation and variety combined with a mass of people of every age, race, and social standing makes these gatherings a fascinating spectacle that keeps some shoppers coming back every year. Still, we can't discount the bargains! Kids will still say the darndest things, as one observed, 'People will buy anything!'

A Flea Market Documentary gives its audience a virtual tour of the best of the fleas. Imagine hitting some of the biggest, oldest, and longest markets in an hour! The whirlwind flea market crawl takes us from Manhattan's 26th Street Flea Market with its selection of vintage jewelry and clothing; antique furniture; and prosthetic legs to the Fremont Market, a Seattle Sunday institution. The Fremont Market is said to be a great spot for twentieth century Americana and curios. In fact, one Seattleite described flea markets as a museum where everything's for sale. Next, we dip to the south in search of the World's Largest Flea Market at the Rose Bowl in Pasadena, California. Since 1968, the stadium has been packed with over three hundred vendors every month! America's oldest flea market is just a few states over. The people of Canton, Texas call their market First Monday Trade Days. While Cantonites argue that theirs is the largest in America, one thing remains uncontested: the market that began in the 1850s is the oldest continually operating outdoor flea market. Back in California, the San Jose Flea Market [2] [video] is more like an outrageous promenade than a market place. They even have a frozen banana guy!

Before we leave for a zip up the East coast, we make a short stop at the Swap Meet at Orange County Fairgrounds. Since the completion of Rick Sebak's documentary, this favorite destination has, allegedly, met its end. The forty-two year old Swap Meet was evicted last month from the fairgrounds due to declining revenue and repeated clashes between the venue and the event's owners. According to the LA Times blog, 'The Swap Meet has experienced a 50% drop in vendor spaces rented, rental revenue, attendance and admission revenue since 2007, with no clear indicators that the trend will reverse in the long term.' It's scary to think that this harsh economy could be the death knell for flea markets, a symbol of frugality and reuse. One would expect the popularity of flea markets and similar sales of used items to be booming when finances are strained.

The Fort Lauderdale Swap Shop is more than just a flea market. It's a destination! The Swap Shop is located at a fourteen-screen drive-in that opened in 1963. The drive-in expanded to encompass a flea market three years later. It's considered the largest daily flea market in the world. The lot also hosts a food court and, until a few years ago, a daily circus performance. The documentary ends with an anomaly, the 127 Corridor Sale, known as the World's Longest Yard Sale. This event runs a four hundred mile stretch along Highway 127, from Kentucky to Alabama, every August. And the sale seems to grow by the year! The route now extends through Ohio and Michigan, and who knows to what lengths it will go! What a brilliant way to spend your weekend! [video]

A Flea Market Documentary is the next best thing to actually being at a flea market. Or, perhaps for the well-traveled collector, it is a prefabricated itinerary for next summer's vacation. If your PBS should happen to air this festival of fleas, unfold your lawn chair and get your roll of quarters ready for an incredible deal!
Posted by Maria at 10/24/2011 12:18:00 AM