The Encyclopedia of Guilty Pleasures 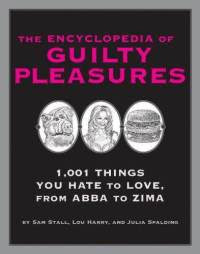 The Encyclopedia of Guilty Pleasures: 1,001 Things You Hate To Love by Sam Stall, Lou Harry, and Julia Spalding (Quirk Books, 2004) is the most opinionated and infuriating pop culture encyclopedia I've ever read.

The book is meant to be a satirical compendium of bad taste which plumbs the depths of trash culture and regurgitates the curiously popular bits. I found the writers' descriptions of the skewered subjects to be shallow and misguided and the writing style to be unnecessarily scathing.

1) The book insinuates that the reader secretly imbibes in an endless array of cerebral junk in the guise of noxious foodstuffs and televisual, musical, and cinematic pap, as well as other various popular culture taboos. Its snarky, all-knowing tone accuses the reader of sheepishly enjoying the lowest of the low brow but assumes one should be so insecure about their pop predilections that they should be hidden for private consumption (or only publicly embraced under the credible sheen of hipster 'irony'). That's all well and good, but sometimes assumptions fall flat. The book does not allow for individuality and personal tastes. Personally, I found that I truly liked enough of the 'pap' culture entries, but many did not apply to my personal tastes.

2) The book, also, matter-of-factly pronounces all 1,001 entries as being equally shameful. Many of the entries are pretty tasteless, I'll agree. Still, I think the writers have a lot of nerve asserting that all of these entries maintain the same level of repulsion and that its audience shares a secret love/hate for the bulk of these phenomena.

Further, the book asserts that, not only do I secretly love these pop culture missteps, but I should be sick with fear that someone should find out my dirty secret. Why? What do I care whether someone judges my taste? So what if someone doesn't agree with what I find enjoyable? So what if I don't like what you find enjoyable?

In many cases, I agree that specific entries have become bafflingly enduring contributions to the American popular cultural landscape, but that doesn't mean that every reader was necessarily duped into loving, say, Kenny G, the perennial punchline. Bad taste doesn't hurt anyone at all, and they use the term 'schmaltzy' as if that were a decidedly bad thing. I suppose I am the type who bristles at being told what's in and out, what's hot and not, what I should and shouldn't like. I highly value individualism in all its glory and misfortune, and I don't appreciate being guided by imposing 'tastemakers.' I realize the book is meant to be a silly bit of entertainment, but it would have been far more interesting if the writers would have toned down the blasé snark and attempted to provide some insight into why we are attracted to these so-called horrors. I think nostalgists know that their tastes often err on the garish side, but there's an underlying affection, even if it's just in pinning a junk food or a cloying pop song to an almost forgotten memory. It's a part of their past they wish to hold on to. Sometimes it's merely mental comfort food.

Now, dear reader, you are probably thinking that I'm the one who took this tongue-in-cheek book too seriously, and that it was meant to be an entertaining satire that should have taken me all of three or four days to finish rather than the weeks I spent seething over some of the postulations. You might even say, 'take it easy, Maria, this book wasn't a personal attack of your tastes and interests. What's wrong with you anyhow?' The truth is, the jarringly self-righteous and knowing tone became more and more unpleasant as I progressed through the book. It was not lighthearted in the least; in fact, I found it to be a little nasty. It made me want to do the unthinkable: defend the merits of Anna Nicole Smith and Big Mouth Billy Bass! Humor books shouldn't send its readers to the brink of such insanity!

If you'll look at the Amazon site, the book has gotten some rave reviews, so it really is just me. I highly suspect the intended audience of this book was meant to overlap with the hipster hells of McSweeney's and Pitchfork, and those people might very well enjoy carting this book around and pretending that they're reading it.

Honestly, there isn't much to recommend this book. It's really just a random list of crap with a short taunting jab at the reader's ego. There have been 1,001 pop culture encyclopedias (and I've read them all), and most have had some glimmer of merit even while stomping over the same well-worn ground. Some really are laugh out loud, others are meticulously categorized, and others have cool trivia tidbits. This book can't claim any of these assets. Not a one. There's not a lot of new ground covered in its pages, and it's not a highly factual book that you would want for pop reference. If it doesn't tickle your personal funny bone, there's really no reason for it to exist.

In my opinion, Guilty Pleasures can't compare to any of the other pop culture encyclopedias on the market. I have two recommendations depending upon which style of guide you prefer. If you're interested in a one-volume book to consult when you're in need of pop culture minutiae, you can't improve upon From ABBA To Zoom: A Pop Culture Encyclopedia of the Late 20th Century by David Mansour. However, if you're in the market for a short, fun book with more than a touch of humor, you want to get your hands on Whatever Happened to Pudding Pops?: The Lost Toys, Tastes, and Trends of the 70s and 80s [read my review!]. As far as The Encyclopedia of Guilty Pleasures, I feel a little guilty that I disliked it so much.
Posted by Maria at 10/12/2011 02:56:00 AM