On the... Television in... October

Right about the time when the air starts to give off a satisfying chill, so too does the television, in the form of Halloween specials, horror movies, and monster marathons. I love this time of year and all its corresponding thrills, and my interest is piqued by a few new shows airing this month. I don't know much about any of them, and I'm not fond of being spoiled, so I haven't looked at a lot of clips or websites about any of them. In fact, it can be said that I know next to nothing about any of these series, but what I have seen has me anticipating some high quality creepiness. First up is American Horror Story. I know little about FX's new horror series which debuts tonight [Wednesday, October 5 at 10:00 PM] (other than the fact that it stars Dylan McDermott and Connie Britton), but I've read some positive reviews. I hope it will live up to the hype! I've also seen intriguing ads for NBC's Grimm, which appears to be a darker, more adult fairy tale (though not to be confused with the new ABC series Once Upon A Time?). Grimm officially airs on NBC on Friday, October 28 (I'm not sure when Once Upon A Time makes its debut), but it looks like Syfy might be showing the pilot episode on Monday, October 24 at 8:00 PM. Check your local listings!

The trusty TV Tango has posted its Halloween/October programming list. Here's the best stuff I've gleaned from the list. Cartoon Network's better sibling, Boomerang, is doing a Super-Spooky Weekday Block all month. Various Scooby-Doo incarnations, The [Animated] Addams Family, The Munsters, and Funky Phantom will be shown from 10:30 AM to 3 PM every week day. Also, it looks like Boomerang has an Addams Family/Munsters marathon scheduled for Monday, October 10 (6 AM to 5:30 PM). Wish I still got that channel! AMC and TCM will be showing a LOT of horror movies all month. TCM is, naturally, the channel you want to tune to for the best in classic thrills and chills. FYI, here is TCM's October 2011 schedule (I haven't watched too many movies for a few weeks, but next week's schedule is really packed.) 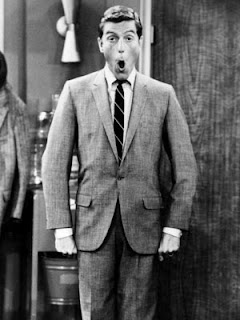 On the less terrifying side of the dial, I discovered that TV Land is celebrating the fiftieth anniversary of one of the best comedies ever, The Dick Van Dyke Show, with a week of marathon programming. Check your local listings. The channel advertises hour blocks starting at 7:00 PM, but I've seen alternate airing times, as well. Unfortunately, I already missed one day's worth of programming since I didn't check their schedule! Don't miss this rare occasion of TV Land actually showing a classic show! Edit: There will be a two-day marathon on TV Land starting at noon on Saturday.

My favorite television show of all-time, The Wonder Years, is now on Netflix Streaming. This is great news for anyone who has that service and/or has not been watching it religiously on The Hub.

Here's something to look forward to: Stephen Fry, Katherine Parkinson (The IT Crowd), and David Mitchell and Robert Webb (the duo behind Peep Show and The Mitchell and Webb Look/Sound/etc.) are collaborating on a new show for the BBC called The Bleak Old Shop Of Stuff. It's a Dickensian spoof by Mark Evans that will air in the UK around Christmas. I got a chuckle out of Robert Webb's quote in the linked press release: "I'm really looking forward to working with my all-time hero David Mitchell. Apparently Stephen Fry is in it too, which is nice." The premise sounds very promising and the cast is a guarantee for quality street comedy. I just hope it makes it into wider release eventually (ie BBC America, the Internet).
Posted by Maria at 10/05/2011 01:36:00 AM