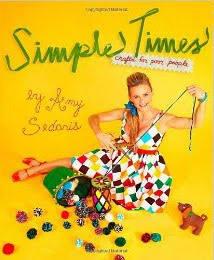 Comedienne Amy Sedaris may be best known for her warped, after school special-inspired series, Strangers With Candy; her off-the-wall David Letterman appearances; and her scene stealing cameos in many popular tv shows and movies. She has also trademarked her special brand of deranged home arts and crafts tutorials in her two best-sellers, I Like You: Hospitality Under The Influence (Grand Central Publishing, 2006) and its 2010 follow-up, Simple Times: Crafts For Poor People (Grand Central Publishing). I've long admired her unapologetic wackiness and have continued to champion her first book, I Like You: Hospitality Under The Influence. As a close friend and confidante, I encouraged her to write another book, and I think I can single-handedly take credit for the fact that she took me up on that challenge (incidentally, looking back on the letter I wrote her, my ideas included an etiquette book and a style/beauty guide, both of which I am hoping to see as future publications).

It's hard to write a review of Amy Sedaris' books because there's a lot more to her work than meets the googly eye. That aforementioned wackiness that makes her such a joy to behold for some might be a stumbling block for other readers. Case in point: book sellers seem to have difficulty knowing where to put her books. Should I Like You, for instance, be filed under home entertaining and cooking with the more straight-forward domestic moguls Martha Stewart and Rachael Ray, or does she belong wedged in the hit-or-miss 'humor' section? I think most of her fans would agree that she belongs more in the humor section, but I believe that she suffers from the fact that people don't know what to make of her. If it's difficult to determine how to take her in person, it's even more so in print. She obviously has a wonderfully skewed sense of humor, but there are times when she seems slightly dismayed by the fact that she isn't taken more seriously. While there definitely is a tongue-in-cheek element to all her work, I believe her books are meant to be more practical than not. Sure, her writing is spunky and some of her ideas are seriously twisted, but behind the patina of wit, she's dead serious about her love of cooking, crafting, and entertaining.

Her books might be an absurdist homage to mid-century cookbooks and craft guides, but don't think for a second that they are a spoof of the genre; they're not meant to have any kind of socio-political, feminist, or supposed intellectual agenda, hidden or otherwise. As Amy Sedaris becomes even more famous, I have read interviews that were actually more cringe-worthy than some of the photos in this book! One that was particularly awkward asked her difficult questions about neo-feminism, gender issues, and her role in promoting traditional 'women's activities.' Even in newsprint, it was clear that she was speechless by the line of questioning. Her careful response was that she had never contemplated those issues with reference to her own books, and she just wrote about things that she enjoyed in real life. And what's wrong with that, huh?

That said, here begins my review of her latest work, Simple Times. It's a campy adult Pack O' Fun in a deluxe hard cover format. The artwork is bright, eye-catching, and horrifying. Half the photos will make you squirm, and two-thirds will make you laugh. Out loud! The writing is punchy, witty, and disturbing. You may find yourself perplexed yet tickled. Many of the crafts and recipes look like fun and will leave you with fond memories of similar school, camp, and Bible crafting. The rest might be illegal in most states. This is indeed a mostly serious collection of hobbies, home arts, and crafting tempered with a heaping helping of the absurdist humor for which she is best known. Whether you're looking for inspiration for your own handicrafts and projects, or if you are just looking for a hearty laugh with a fun book, Simple Times is just the ticket. So, in the end, Amy Sedaris has the last laugh because, whether she's an oddball or not, her book fits no matter where it is filed; these truly are simple craft and home ideas that anyone can do (unlike the works of Martha), but the worst crafter or cook can still find thrills in her books. Everyone wins when it comes to Amy Sedaris! Simple Times is simply charming!

Visit Amy Sedaris Rocks to stay current on all things Amy Sedaris, and head on over to her official YouTube channel for instructional videos.
Posted by Maria at 1/29/2011 02:37:00 AM