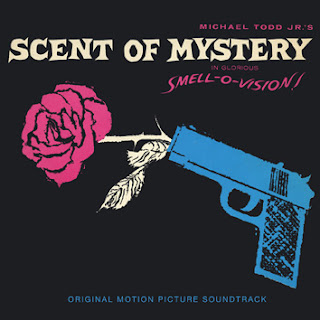 ran the promos for Scent Of Mystery, a film created to introduce a scentless world to a senseless innovation called Smell-O-Vision championed by producer Mike Todd, Jr. (son of Mike Todd, one of the greatest loves of Elizabeth Taylor's life). Smell-O-Vision was meant to work as a sort of olfactory PA system. Implementation of this marvelous invention required movie theaters to be outfitted with contraptions that were supposed to dispense and disperse smells to coincide with certain scenes of a film. Scents were then piped through these appliances out to the auditorium. Intended smells were either meant to have a character association, as one character was accompanied by the stench of tobacco, and others were meant to complement the action on the screen, as with the gust of 'grape' coinciding with smashing casks of wine. However, it was a half-baked gimmick (much like those of William Castle) beset with technical snafus. First, there was no practical way to control wafting aromas and, often, smells would be stronger in one part of the theater and not reach the other half of the audience on cue. And that was only the tip of the nose! Comedian Henny Youngman joked, "I didn't understand the picture. I had a cold." 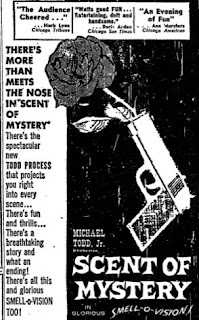 Scent Of Mystery was the only film made in Smell-O-Vision, but, unfortunately, this thriller starring Denholm Elliot and Peter Lorre, was a real stinker, and, soon after its release, Smell-O-Vision wafted away to become little more than a cinematic footnote. Today happens to be the fifty-first anniversary of its debut (January 12, 1960). Here are three clips from the movie for Peter Lorre fans: 'I Volunteer', 'Such A Waste', and 'Taxi?'

The marriage of story and scent had a resurgence in the 1980s with John Waters' Odorama, and Scent Of Mystery was later aired utilizing a more portable creation: the scratch and sniff card. Personally, I think Smell-O-Vision is due for a comeback. If home audiences are now falling for the (still schlocky) 3-D craze, then there's surely room for Smell-O-Vision in our home theater systems!

Links of interest:
Lots more (including info about Old Whiff, the cartoon short that accompanied the movie) at In70mm.com.
A brief history of Smell-O-Vision at Wired.
Smell-O-Vision vs. Aromarama.
Posted by Maria at 1/11/2011 09:41:00 PM