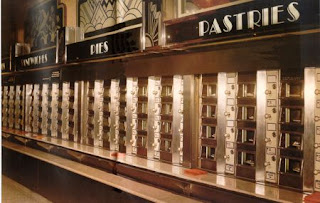 If I could travel back in time and work anywhere, I would choose a bustling Horn & Hardart's in Manhattan. I'm completely enthralled by the entire concept of automats, and I can't believe that they no longer exist (this isn't entirely true -- there are modern equivalents, but it's not the same). I'm always interested in scrutinizing movie scenes set in automats, cafeterias, nightclubs, five and dimes, department stores, and the like -- those mundane settings that were completely unremarkable when the movies were first released but now could be seen as curiosities because of their obsolescence or extinction. (Or, scenes from areas that are gone or endangered.. like original footage of Coney Island, for instance) Sure, I suppose that would be like staring at a scene taking place in a McDonald's lobby and trying to get a good look at the dollar menu, but I can't help my fascination of everyday views of the past. Recently, I rediscovered a movie that had an automat scene, which was made even more thrilling by the rare footage of BEHIND the automat's windows. This movie is the Doris Day/Cary Grant romantic comedy, That Touch Of Mink. In the film, Doris' roommate, played by Audrey Meadows, works in the automat and is reprimanded for supplying her pal with free meals.

This rediscovery lead me on a field trip to the IMDb to see if I could scrounge up more movies that bring the past to life. Specifically, I was looking for more movies that have automat scenes. The list the Db spat out is as follows:

My new quest is to see all the movies that I've asterisked*. Can anyone confirm whether or not these movies actually have automat scenes? Is this list lacking movies with automat, cafeteria, and/or five and dime settings (or scenes that might be of similar interest to a nostalgia enthusiast)?

(Incidentally, I just discovered IMDb's lousy interface update. Apparently, the notion of 'ease of use' ain't what it used to be.. I'm talking to you, too, Flickr.. and EVERY other decent site that keeps exchanging simplicity for flashy bloat. Thanks for constantly taking the joy out of the best of the internet!)
Posted by Maria at 9/16/2010 10:54:00 PM