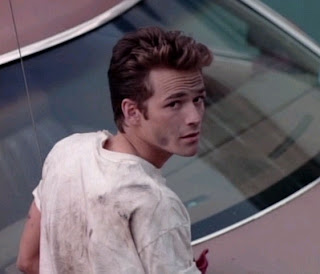 Beverly Hills, 90210 was one of my favorite shows in the 1990s, in no small part because of the James Dean of West Beverly, Dylan McKay. Because of Dylan's troubled relationships with his criminal father and his absent mother, his on and off relationship with Brenda Walsh, and his budding alcoholism, he was the most volatile character on the show (even more than Brenda and Kelly's mother, Jackie). But the brooding and angstiness were all part of the Dylan allure.

So, here's a quick run-down:
1. 'Isn't It Romantic?' is a favorite episode because it first acknowledged Dylan and Brenda's relationship, which was, for me, a weekly draw to the show.
2. 'Fame is Where You Find It' was a fun episode. While Brandon was cast in a popular teen drama, Brenda took over his job at the Peach Pit. At first she was really klutzy and terrible at juggling orders, but then she created a stereotypical diner persona, 'Laverne', which drew a huge crowd to Nat's. Brenda actually had a personality, so I felt that she was the most interesting female character on 90210 (well, when she wasn't bitching about Dylan).
3. The two scariest, yet most memorable episodes were 'The Slumber Party' and 'It's Only A Test'.
4. 'U4EA' and 'My Desperate Valentine' were the two most absurd episodes in the Emily Valentine plot arc. Ultimately, these are probably my two favorite episodes. Lesson learned: Never let Emily Valentine get you your drink.
5. The gang of West Bev (and the rest of America) go Color Me Badd crazy!