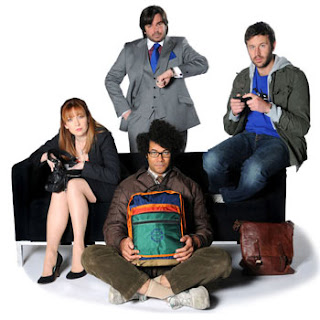 Did you see the ludicrous display last night?

I just found out (an hour late!) that IFC will be airing the fourth series of the hit British comedy, The IT Crowd, starring Richard Ayoade and Chris O'Dowd as the super-geeky in-house tech support staff at a company (Reynholm Industries) and Katherine Parkinson as their supervisor. The IT Crowd was created by the great Graham Linehan, who was also responsible for Father Ted and Black Books. All three shows are highly recommended, but The IT Crowd is my favorite. The fourth series begins (ahem, began) Tuesday night at 10:30 PM (although, it will reair at 3:30 AM, so it's worth checking your listings -- it might be reshown again) on IFC. There are six new episodes in the fourth series, and I don't know anything at all about this new series. Here's hoping it's even better than the third!

(Fans of The IT Crowd should also check out everything else that Richard Ayoade has ever done, namely Garth Marenghi's Darkplace, which aired briefly on Cartoon Network's Adult Swim, along with other FANTASTIC British shows like The Mighty Boosh, Look Around You, and the original series of The Office.)

Also, much to my delight, Cash Cab is back with a batch of all-new shows on the Discovery Channel! What's Cash Cab? It's a TV game show that takes place in the back seat of Ben Bailey's taxi! He asks contestants a bunch of general knowledge questions, and contestants earn cash money en route to their destination. Last night's Cash Cab: Las Vegas specials were kind of schlocky, but the new season looks good so far! Cash Cab airs on the Discovery Channel (weeknights from 6 to 8 PM -- Check your local listings for actual times!)
Posted by Maria at 8/10/2010 11:52:00 PM

Email ThisBlogThis!Share to TwitterShare to FacebookShare to Pinterest
Labels: cash cab, television, the it crowd