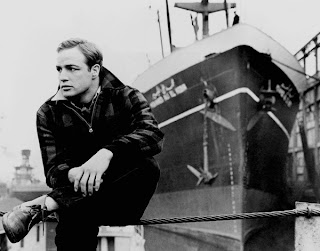 See, Johnny used to work on the docks, but the union's been on strike.. 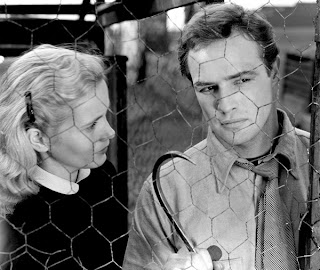 Once you see this movie, believe me, you'll be hooked, too! 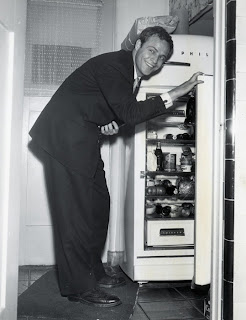 What's in Marlon Brando's refrigerator? Coke and lots of it. Butter. Del Monte Tomato Juice. Carnation Yogurt. Something else Carnation. It looks like a lot of wrapped stuff (meats and produce maybe). Various bottles of stuff.
- - -
I never thought much about Marlon Brando until December 18, 2009. That was the day I saw On The Waterfront. At first, I was merely impressed with his acting (and, of course, all the other fine actors in the movie, including Eva Marie Saint, Karl Malden, Rod Steiger, and Lee J. Cobb). Despite his undeniably fine acting, I couldn't see what the big attraction was.. until halfway through the movie when I realized that I found him absolutely enthralling. Now I consider him practically perfect: possibly the single most desirable man ever made. I know his looks and acting went to pot in the late 1970s or so, but that can never truly spoil his greatness.

On The Waterfront is about the complex workings of a union: corrupt bossmen (headed by Cobb's Johnny Friendly) and the workers who have no choice but to ignore the greed and nepotism on the docks if they want to continue collecting a paycheck... and stay alive. After Edie's (Saint) brother is killed off, the 'coulda been a contender' Terry (Brando) becomes embroiled in a dilemma as to whether to settle into the comfy niche that his brother Charley's (Steiger -- a far cry from po' Jud Fry!) loyalty has carved out for him or stand up to Friendly and his cadre along with Edie and Father Barry (Malden). This sounds more like a Bon Jovi song than something I would normally want to watch, but it is strangely riveting. Brando's acting seems so effortless and cerebral, and you're left guessing his thoughts and motivations as the most subtle and vulnerable nuances of emotion wash over his roughly hewn face. It's this contradicting combination of tenderness and harshness that makes Marlon Brando so compelling and attractive. He seems untouchable and yet more human than anyone in the world all at the same time.

On The Waterfront is easily my pick as his most essential movie, though he is equally worth looking at in A Streetcar Named Desire. His character is an unforgiveable brute, however, he is also at his sultry best. While Stanley Kowalski's final beastly act is so abominable that he should be considered one of the most despicable characters ever to be portrayed on stage or screen, it's hard not to understand Stella's magnetic attraction to her savage husband.
Posted by Maria at 8/25/2010 11:40:00 PM