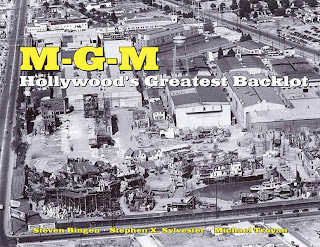 California is known for its full range of geographical terrains inching up from dry desert heat and dangerously curving into palatial Pacific coasts, dense redwood forests, paradisal fields of flowers and orchards, and capped with snowy mountains. It seems quite fitting that this cinematic Shangri-la should be as ostentatious as the reputation of its southern hotspot, Hollywood. After all, one needn't leave Culver City to travel to the furthest reaches of the earth and from yesteryear to the glimmer of a far distant tomorrow. It is on the vast real estate called backlots where the reality of movie magic was truly invented, and no other movie studio encapsulated the true grandeur of Hollywood's potential as Metro-Goldwyn-Mayer. Once boasting more stars than there are in the heavens, M-G-M's unrivaled star power was only outdone by its awe-inspiring backlot. While M-G-M's collection of backlots have officially followed the great movie moguls to their own demise, they are legends that the few survivors of the studio system continue to describe in astonishment.

M-G-M: Hollywood's Greatest Backlot (Santa Monica Press, 2011) is the best guidebook for a place that no longer exists. Writers Steven Bingen, Stephen X. Sylvester, and Michael Troyan take the reader on the ultimate tour of the ultimate backlot. This is a virtual tour of a Hollywood that no longer exists, and, some could argue, never did. It was on these unassuming backlots populated with mere facades of main streets, foreign villages, jungles, and cityscapes that the biggest M-G-M hits were born. As much as seeing the naked lots (or the multitude of photos showing the same lots being thinly veiled and dressed up for all manner of movie scenes) shatters the illusion of movie magic, it creates a whole other admiration -- a wonderment of how these dressed-down plots of muddy dilapidation could pass for Paris, Tarzan's jungle, and Main Street USA. The most striking aspect of the book is how lovingly and exquisitely detailed it is. The research compiled in the book is incredible, and it is filled with meticulous maps, photographs, and original documentation, as well as background information from the people who worked and walked the backlots themselves. The writers provide an unmatched glimpse behind the facades of each filming site and detail some of the movie magic that was made in each location from the lots' original formation to their ultimate dismantling. The writers manage to nestle the biography of this greatest backlot into a concise contextual history of the rise and fall of Hollywood's much ballyhooed studio system, so the reader can grasp the importance of M-G-M as a business model rather than merely an artistic one.

The book is as much an elegy to the end of an era as it is a celebration of what made movies great in the golden age. There is a lot of information regarding the collapse of the system and the razing of old Hollywood for a new generation of filmmakers. Sadly, the extensive locations that brought the elusive sparkle of movies to life became themselves faded relics. The book ends with the physical razing and liquidating of M-G-M's backlot and assets, the death knell for a Hollywood that can now only be read about or seen in old pictures. We have the writers of this book to thank for unearthing and preserving what little information remains of what was indeed Hollywood's greatest backlot. This is a must-read for all cinemaphiles and for those who want to understand the inner workings of a Hollywood studio at the height of its greatness.