Where has Toy Hunters been all my life? Toy Hunters is a new series that debuted last month on a channel normally devoted to perverse gluttony and vacations that attack, the Travel Channel. Toy expert Jordan Hembrough is on a mission to uncover the rarest and most collectible toys of the 1970s and 1980s for resale at New York's Comicon. In this week's episode, he headed to Ohio, former headquarters of Kenner, to rummage through former employees' private stashes of mint in box wonders and some toys that never even made it to store shelves. There are plenty of original Star Wars, MASK, and Carebears treasures, but the real gems include the mythical prototype of a never-produced (unpainted even!) Boba Fett action figure with a real shooting missile that was deemed unsafe and a rare Thundercats bubble action toy. My choice item of the episode was a top-secret Ewok figure that had been deliberately packaged with a Squid Head backing card. The back of the card that normally shows a selection of the line had the new Ewoks characters blacked out since Return of the Jedi hadn't been released yet. Toy collectors will salivate over this show, even though it is true that, like most 1970s-80s toy and collectible references, it could have included much more in the way of girls' toys. Just as I couldn't get enough of gawking in toy stores when I was a kid, I sure hope there's more Toy Hunters coming up! I'm still unsure of how many episodes of Toy Hunters have already aired, but apparently it has just been picked up for a season of twelve half-hour episodes. [Speaking of wondering what happened to a great collectible show: Hey Syfy, when will there be more Hollywood Treasure? AND I still love Discovery's Auction Kings. These three shows would be so good together.]

Read a Q&A with Jordan Hembrough at Nerd Bastards. 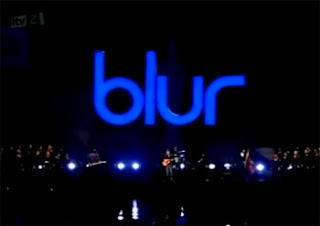 It felt as if it were 1994 again! Legendary britpoppers Blur (champions of the famed Britpop wars) were honored at the 2012 Brit Awards with an Outstanding Contribution to Music award. After Adele's humble gesticular hissy fit, the quartet blasted onto the stage with a rousing five-song medley of their hits, including 'Girls and Boys;' 'Song 2;' 'Parklife' (oi, complete with actor Phil Daniels as in the original version); 'Tender;' and 'This Is A Low.' Audience members who were old enough to remember the 1990s greeted our boys with enthusiasm, and there were few who didn't sing and dance along with their entire set proving that some Brits still like a good song. I guess modern life is even more rubbish. The BRITS were shown in the U.S. on the Fuse music network (and ITV2 in the UK). It's possible they might air it again; check your local listings. In other Britpop news, Pulp has continued its reunion and is slated to tour America for the first time with its full classic line-up (including guitarist/violinist Russell Senior) since Different Class in the mid-1990s.
Posted by Maria at 2/22/2012 10:51:00 PM