Ken Carson, This Is Your Life!

Call it kismet! Who looks just as young and hip today as he did on March 11, 1961 when he met a certain beauty queen on the set of a television commercial? Ken Carson charmed Barbie fifty years ago last week and immediately skyrocketed to superstardom as her steady beau. Yes, Ken is officially fifty years old! Before David Bowie and Madonna made careers of revolving personae, Barbie and Ken made reinventing themselves to stay relevant of utmost importance. When they weren't accessorizing, they teamed up to take on every variety of career and recreational hobby under the sun. According to Wikipedia, Ken has held down at least forty occupations in the past fifty years, which makes him the ultimate job hopper!

While Ken was never my type, he garnered many fans over the past five decades with his highly adaptable good looks and intuitive ability to change with the times. Last week, Parade Magazine looked back in celebration of the past fifty years of Ken's life, so I thought that I would utilize their graphic in an abbreviated highlight reel of the many styles of Ken Carson! (All Ken imagery are owned by Mattel, and this graphic is courtesy of Parade Magazine) 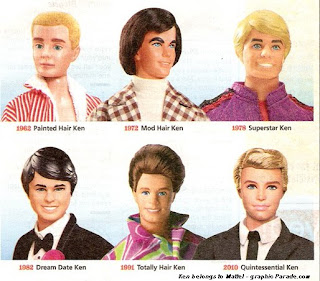 1962's Painted Hair Ken has a California chic fuzzy crewcut. His original peach fuzz hairdo was actually made of felt! Like many beach boys with felted hair, it tended to fall off when wet. That's quite impractical for any moondoggie, so he soon had his hair plasticized. Not only did he bear a striking resemblance to Dobie Gillis, but he, too, wanted a girl to call his own. He found that girl in his fully-poseable soulmate, Barbie.

Now, this one was a sweet toy line. 1972's Mod Hair Ken was modeled after Neil Diamond, and he's coming to your playroom.... TODAY!

1978's Superstar Ken elicits a sort of mellow machismo. He's either a Steve McQueen look-a-like or maybe he's just trying to look like David Soul's (Kenneth!) 'Hutch' Hutchinson. Regardless, I'm sure he races cars and probably has a dune buggy he rides out in the desert.

Ken entered the 1980s as sensitive Dream Date Ken with the dream boat looks of a Donny Osmond.

1991 was not Ken's year. He took one look at N*Sync and transformed into Totally Hair Ken (okay, 1991 may have been closer to New Kids On The Block than N*Sync, but even the New Kids weren't as tacky as Totally Hair Ken).

In 1993, he was reintroduced as Earring Magic Ken, which became one of his more controversial styles (conservative backlash actually led to its recall from store shelves) yet a commercial success. [not pictured]

And, finally, meet Ken 2010: Quintessential Ken. What makes this the Quintessential look? I'm not sure if we're meant to think of Ryan Seacrest or, possibly, Mad Men. Either way, all I see is Victor / Victoria, and now I want to hear him sing 'You And Me' with Robert Preston!

To Mr. Carson, may your next fifty years have as much penache as the first! Which was your favorite Ken? Keep up with Ken at Keeping Ken and make sure your Ken is the Genuine Ken.
Posted by Maria at 3/20/2011 12:43:00 AM

Email ThisBlogThis!Share to TwitterShare to FacebookShare to Pinterest
Labels: 1960s, on this day, toys