The 90s Were All That!!, according to the folks at TeenNick, which debuted a new weeknight block of retro-themed programming celebrating those bygone, heady days of the... 1990s!? Yes, apparently, it's never too early to reminisce fondly over your lost childhood. 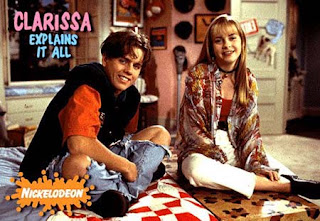 Eat your heart out, Harvey Kinkle!

Here's the line-up, so far:
All That, a Saturday Night Live-styled show for kids which aired from 1994 until 2005. Notable alumni include Kenan Thompson, Kel Mitchell, Amanda Bynes, and Nick "Mr. Mariah" Cannon.
Kenan And Kel spun off into their own show in 1996 (until 2000). I was thrilled to see a familiar face in the cast, Dan Frischman (Arvid, everyone's favorite nerd from Head Of The Class), whose future was so bright that he had to wear shades! Case in point: Frischman played both 'guy on phone' on an episode of Seinfeld and County Records Clerk on Melrose Place. And, yes, I do remember both episodes!
Clarissa Explains It All, Melissa Joan Hart's first television series. Not quite as good as Sabrina, but that would really be expecting too much of a tv show!
Doug, a cute animated series which began in 1991. 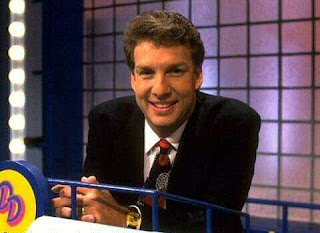 So far, the reception has been wildly enthusiastic. TeenNick, never a contender for highest ratings in that particular scheduling block, received an impressive ratings boost during its first week, and certain social networks were all a-twitter with comments relating to the programming. The apparent success of the endeavor makes a curious viewer wonder if Nickelodeon will be expanding their new schedule with more blasts from the past. The hypnotic megamix commercial that TeenNick drums into our brains while we're watching this super-sweet block of programming shows copious clips of Double Dare, which I HOPE will soon be added. After all, who doesn't love Marc Summers? Just think, you could watch Double Dare and then tune into the Food Network to see what he's been eating on Unwrapped!

Retro programming on cable is not a new concept, of course. The HUB has been doing it for almost a year. They've been airing an exciting collection of older family-centric programming every weeknight (including The Wonder Years, Laverne & Shirley, Happy Days, Family Ties, Doogie Howser MD, and Batman). They relaunched three popular 1980s cartoons, Jem; Transformers; and G.I. Joe; and they added revamped versions of My Little Pony and Strawberry Shortcake to their channel, but they are noticeably inferior to the original series that launched many girls' playtimes. Speaking of revamped 1980s animated series, Cartoon Network aired the first episode of its new version of Thundercats, a favorite of mine in the 1980s, on Friday night at 8:00 PM. Sadly, it didn't reignite my love of the franchise. Perhaps Thundercats was never a very good show to begin with, or, maybe this version is too different. Interestingly, Will Friedle, who played Ben Savage's cuter older brother on Boy Meets World, voiced Lion-O in this new version. Personally, I would prefer to stick to Cartoon Network's superior Boomerang channel to satisfy my itch for old cartoons. It's a sure bet since it airs mostly classics from the 1960s to 1980s.

While The HUB is a breath of fresh air, it's surely taking inspiration from the once glorious Nick At Nite. I'm still gutted at the poor state of Nick At Nite and its younger sibling, TV Land. Both have become disappointing wastelands airing non-remarkable and fairly recent crap like The George Lopez Show and The Nanny. Three's Company is great, but it begs the question: how much Mr. Furley can one really take? (Also, 'did the production team spend all their money on Mr. Furley's medallions?,' but that's a different issue for a future post) What happened to Nickelodeon's mission to provide CLASSIC tv programming to the masses? I have to assume they felt that they had exhausted people with the timeless, and they wanted to appeal to an audience with lower expectations. I hope that the Nickelodeon programmers will take a cue from the popularity of their 90s block and bring back the 80s.. and the 70s.. and the 60s.. and the 50s..! Wouldn't it be great if they would repopulate their schedule with fun and innovative programming again? I should also add that the Nickelodeon channel predated these 1990s shows by about a decade, and while these might have been what put Nick on the map, it would be great for them to open their vault doors a little wider.

Other cable and non-cable channels should take a hint, too! Comedy Central, for example, used to be a decent channel but now only shows random guys narrating lame YouTube videos and unfunny comedians I've never heard of doing terrible stand-up routines. I'd be willing to fashion a whole new schedule of 'oldie' Comedy Central programs for them!

My retro dream channel, however, would be devoted to vintage PBS. Old PBS children's programming can't be beaten by anything that's on television today. From whole episodes of classic Sesame Street, Electric Company, and Mr. Rogers through 3-2-1 Contact, Square One TV, and Reading Rainbow -- not to mention the best geographical game show ever, Where In The World Is Carmen Sandiego? -- this would be a fantastic idea and a huge draw to PBS. In fact, I bet they would see a boost in donations if they would reinstate some of their better fare. Personally, I think we all could use a review of these fun, educational gems. Sometimes one forgets letters of the alphabet, how to add, and how to form a proper sentence. We're probably also lacking in basic science and geographical knowledge, as well as the gentle art of civility as taught to us by Mr. Fred Rogers. Leave out the Bar(lo)ney, Clifford, and Elmo! Make that E in "E/I" count, PBS!

Well, one can dream about these ultimate schedules, but Nick's new programming block is a step in the right direction, and I recommend tuning in every weeknight (from 12 to 2 AM EST) if you were a fan of any of these shows that were, you know, all that!