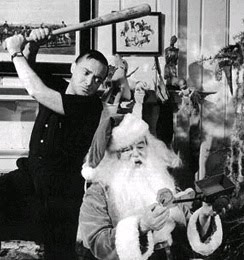 Father Christmas, give us some money! Don't mess around with those silly toys! TCM's Movie Morlocks blog puts the M in merry with a holiday post about Peter Lorre. Sure, Peter Lorre is probably not the first actor you think of when you think of wintery movies, but there are some nice seasonal morsels, including a picture of his personal 1937 Christmas card! 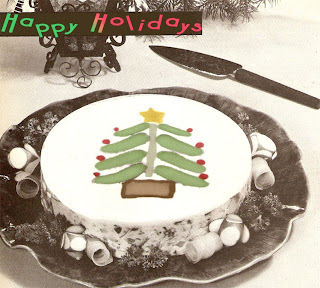 And, here is my personal 2010 holiday card to all my friends and readers. Photo is from Things To Make For Christmas (Fawcett Publications, 1965), which I have been highlighting this month at Curly Wurly and has been expertly handcolored by your humble author (and, clearly, design guru). The recipe can be found at the original post, and I want to be contacted immediately if anyone ever recreates this beauty! 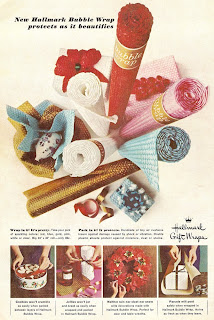 In 1965, Hallmark even made bubble wrap classy! Yes, 'New Hallmark Bubble Wrap protects as it beautifies.'

Finally, I wanted to link to a few holidays tidbits on YuleTube. I was hoping to find a clip from my favorite Simpsons episode ('Homer's Phobia' from season eight). This is the episode where John Waters has a kitscherie shop at the mall, and Homer takes Bart to shoot reindeer at Santa's village in order to ensure his manhood. I did find this clip, but I'm fairly certain it's dubbed into Spanish. Instead, I give you the greatest gift of all: my favorite Tom Lehrer song, (I'm Spending) Hanukkah In Santa Monica [slideshow/video by knickerbockervillage]! And, here is Lehrer's A Christmas Carol, also on YuleTube!