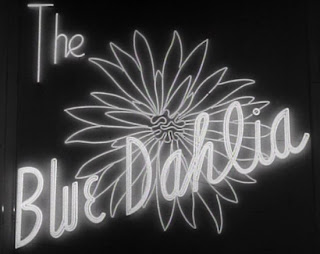 "It takes a lot of lights to make a city, doesn't it?"

In honor of Veronica Lake's birthday, I present one of my favorite film noirs. The Blue Dahlia was the first screenplay Raymond Chandler wrote which wasn't based on a published novel or story, and according to this TCM article, it's a small miracle that the film was ever completed. I'm thankful that it was because it's fantastic. It's one of those rare noirs that succeeds both in story and atmosphere. It oozes danger and glamour to shadowy perfection yet its plot isn't too convoluted to cause confusion. It, also, has an interesting cast of characters that sets this movie apart from more generic film noir fare.

In the film, Johnny (Alan Ladd) returns from the war only to discover that the life he left behind no longer exists. While he was gone, Johnny's wife became the toast of a bunch of rowdy revelers, and she became especially friendly with the owner of The Blue Dahlia nightclub. Johnny walks out soon after discovering his wife's infidelity. But, was he the last one to see her alive? 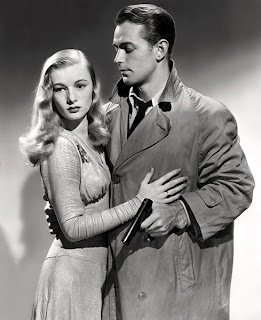 Alan Ladd and Veronica Lake still from This Gun For Hire

Veronica Lake is the enigmatic Joyce who seems to materialize from the bright light of a street lamp like a guardian angel. In fact, she has the face of an angel and the gams of a she-devil! Joyce seems to be there whenever Johnny turns around. Who is she and how does she seem to know who he is?

William Bendix, one of Johnny's ex-GI friends (the other one is the Beaver's father, Hugh Beaumont!), steals every scene as the slightly manic, yet lovably loyal, Buzz. In fact, he seems a little too invested in Johnny's happiness. Maybe he was the last one to pay Johnny's wife a visit? Or maybe he just wants a little quiet. No more of that monkey music!! 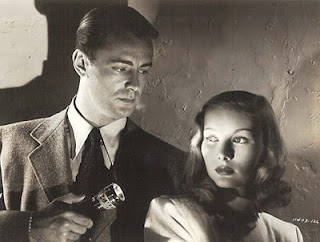 Studio still from The Blue Dahlia 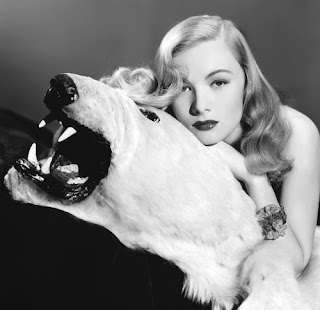 The Blue Dahlia is, unfortunately, not available on DVD. It's been on TCM several times in the past year -- It looks like they have it on the schedule for Friday, December 3 (10:15 AM EST). Keep checking Paramount's archives to see if they ever release it (or make it available by request). [Also of interest: Doctor Macro's collection of the Alan Ladd old-time radio show, Box 13]
Posted by Maria at 11/14/2010 10:53:00 PM